Thanks God it’s Friday! It’s time for Mommy Moments and for this week the theme is School Days.

Sean is now in Kinder 1, studying in PNU CTL (Philippine Normal University Center for Teaching and Learning). Here are some of his pictures taken on the first day of his class on June 15, 2009. The other 2 pictures where he poses ala Mr. Pogi were taken in SM a week after. 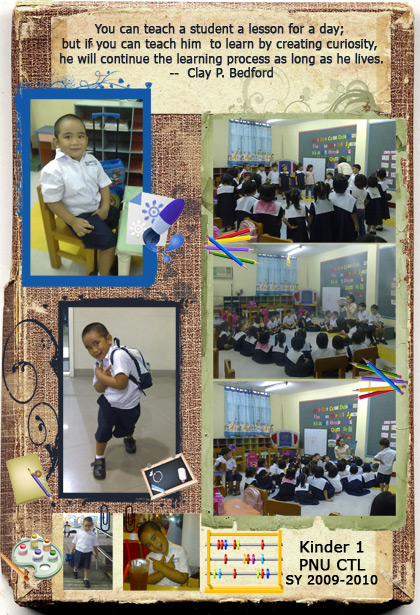 Before his first day at school we asked him at home how he would introduce himself to his new classmates, so he acted it out. But on the day itself he was timid and tongue tied. They were all asked to go in front and introduce themselves. Three or more students didn’t say a word, including him. His teacher called him Francis and introduced him in the class.  He told me he preferred to be called Sean so I told him to tell his teacher but he’s too shy to speak.

Everyday while we were in the bus going home, I would ask him what he learned from school, or what he did at school. Was he reprimanded for being ‘makulit’? Then he would tell me, “Secret, sasabihin ko lang pag nasa house na”. One time he admitted that he was on ‘time-out’ for a few minutes or so because he’s playing with one of his classmates while doing some activities.

And how can I forget? Here are Sean’s pictures during his Nursery Days in Manila Day Care Center. 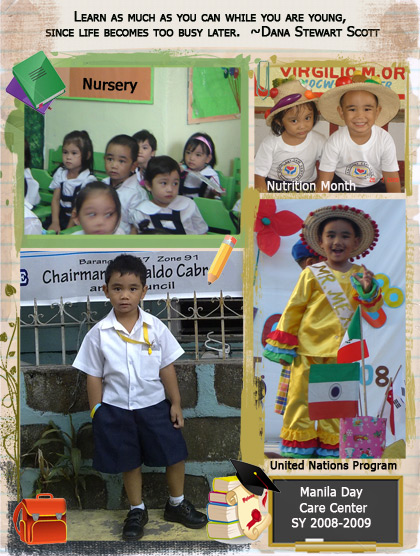