This is my entry for Mommy Moments theme – Tantrums. Better late than never 🙂

Every child will have a tantrum. I don’t know any child who doesn’t have tantrums. Some children have less, some have many. Unfortunately Sean belongs to the latter. I don’t really give in to his ‘demands’ whenever he has tantrums. I tell him I’m the one in control and not him. In fairness to him, it’s easier to settle him down (well, sometimes). When he’s showing tantrums, most of the time I would just tell him okay go inside the room, come back here when you’re feeling better and when you’re ready to talk to me. In just few minutes he would come back smiling as if nothing happened. 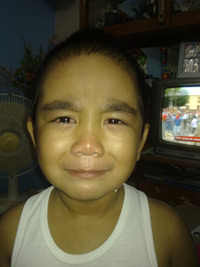 Sean’s crying here because I didn’t allow him to change the tv channel. I want to watch the news and he wants to watch Ben10 and Tom and Jerry on Cartoon Network. I told him he can watch it after the news but he said “tapos na rin yung Ben10 at Tom and Jerry pagkatapos ng news, huhuhu”

He shows tantrums whenever he wants to play on my cellphone, on the computer, on the arcade or when he wants something but I wouldn’t let him. I would say it can’t be or later or wait for your turn. Then he would say, “puro later, puro wait for your turn” and would start to cry. Iyakin din kasi yan, ewan ko ba kung kanino nagmana hehe.

What I don’t like the most is when we’re in the mall and he shows tantrums, he would sometimes sit on the floor and stay there. I would tell him to stand up or else I would leave him there. If he won’t stand up, I would ignore him and walk out. When he sees me walking away he has no choice but to obey.  And if still he won’t obey, I tell him I would give him a key, as in kurot!

You can join us in Mommy Moments here.