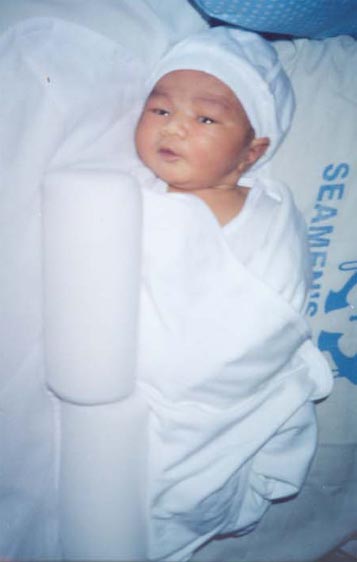 Today my Baby Sean is 23 months old. One more month and he’ll be two years old ‘officially’. How time flies. I still remember the first time I saw him at the Seamen’s Hospital nursery on March 28, one day after I gave birth to him on March 27, 2005 at around 3:07 PM via cesarean.

It was a long day labor, having been ‘rushed’ to the hospital at 3:00 AM. All along we thought it’s a normal delivery, but the baby’s head have not engaged although at 8:00 AM the doctor said I was 8 cm dilated. They said they will perform emergency cesarean if at 11 :00 AM the baby’s head is still not moving down.

I was sleeping during the cesarean process. I woke up because I couldn’t breathe. I gave them a sign that I can’t breathe so they put oxygen on my nose. And then, I’m sleeping again. I wanted to see the whole process sana. I want to see my baby being carried out of my tummy, but I really was so sleepy and exhausted, maybe because of all the medicines they have given me… and also for the long labor that I went through.

When I woke up I thought I’ll be seeing my baby, but I didn’t. When I was transferred to the recovery room, it was 4:00 PM already… and I was so sleepy. I asked my sister if she have seen my baby, she said yes but only for few seconds. My sister was the one who accompanied me to the hospital along with my sister-in-law and father-in-law. My husband was not around at that time coz he’s working abroad. 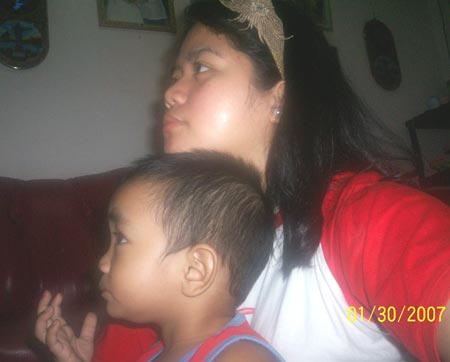 Now at 1 year 11 months, Sean is an active, playful and a smart boy. It’s so fun when he imitates your action, says whatever you say, in his bulol version. Sometimes I can’t understand what he’s saying. I just laugh silently whenever we sing songs and I hear his version.

Sean could say and identify the letters of the Alphabet, although there are times that he’s confused on letters such as K and X. He can also say and identify numbers from 1-10 and knows the basic shapes. He would always ask for his ‘bets’ (alphabet) puzzle.

I don’t know if sometimes he’s just being playful or di nya lang alam but sometimes when I ask him of a certain letter, for example E, he would say M, when few days ago he knows it’s letter E. Ask him again after few hours he would say it correctly naman.

Sometimes Sean is showing he’s being hard headed… mana sa akin? He would insist on doing what he wants to do, even if I tell him not to. Well, almost all babies are like that naman ata, unless your baby is a totally behave one. But in fairness, Sean is a good boy naman, he’s also sweet. 🙂