Sean loves Barney. He watches Barney videos over and over. I told him last week that if ever Barney will have another live show here in the Philippines we would surely watch it.

We learned that Barney will be celebrating his 20th birthday live on stage at SM Cinemas. We will be watching Barney, Baby Bop and BJ live for the first time and we’re so excited! But Sean’s afraid of mascots. He loves Jollibee too, but so afraid of getting near him. I wonder if he would be afraid of Barney too. I hope not. 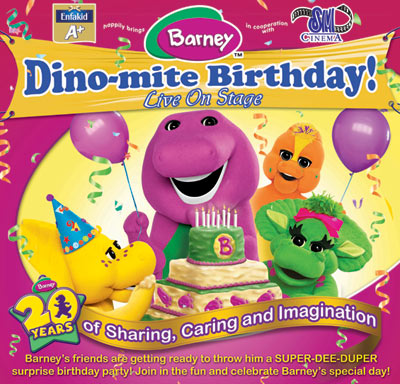 Here are the schedule of Barney’s live show at SM Cinemas.

Limited seats available so get your tickets now! Tickets are available at all Ticketnet Outlets, call 911-5555 for more details.