Sean turned 2 years old today. We had a mini party in the house. I invited all of his friends in the neighborhood, ages 2 to 8 years old. We prepared spaghetti (as usual), fried chicken, hotdog and marshmallow kebab, mango juice and rocky road ice cream for the kids. I also cooked Beef Caldereta and Chopsuey for the “old-ones”, including me of course, my sister, sisters-in-law and Sean’s cousins. I ordered Barney cake from Goldilocks, worth P700. Last year, on Sean’s 1st birthday the theme was also Barney, bought the cake and cupcakes from Kitchen Krafts and it costs more than 3k, but it’s worth it because the cake tastes good and the design was nice. Goldilocks’ cake was also nice and simple.

We first went to Red Ribbon at SM Manila last Saturday to order a birthday cake, but I didn’t see Barney designs so we decided to go to Goldilocks instead. Sean likes Barney a lot that’s why I really want a cake with Barney design. Luckily, when we went to Goldilocks, we found more than 5 designs, but I opted for the simpler one, a 10″ Round Choco Chiffon Cake.

I also made a Mocha Magnifico Refrigerator Cake, recipes I got at the back of Nestle All Purpose Cream. Put some choco wafer sticks and chocolate coated biscuit for the number 2 design.

Francis is in the US today, he rung this morning to greet Sean. I received text greetings from my sister, and from Sean’s cousins. My aunt also rung and greeted Sean. 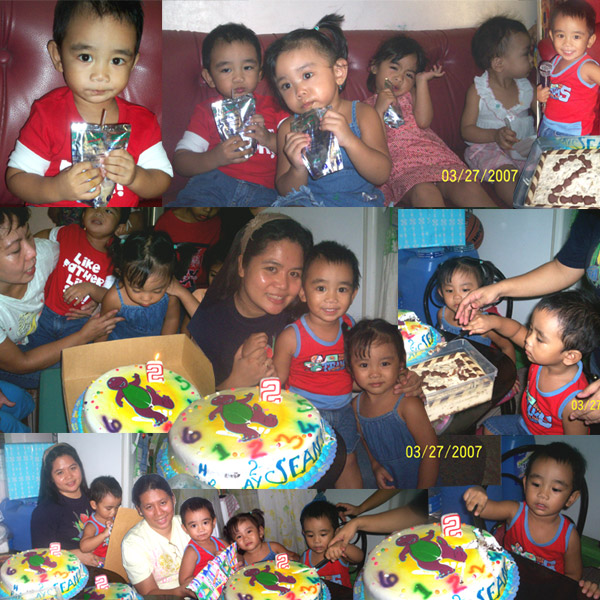 Sean’s friends came in around half past 4. I planned to have 3 games (with prices of course) but that didn’t happen, you know why? Two or three of the kids cried because they are quarreling over Sean’s toys. I’m glad Sean was kinda behave at that time, because if not, I don’t think he would allow his toys to be played by somebody else. In fairness to him, there were some instances that he would share his toys, but not all the time.

I told Sean that he’s going to give out the party favors before his guests leave. He was very excited that he wanted to give it to his friends even though they’re still eating. He went inside the room where the party favors are and said, “Mommy give please” I told him he’ll do that later.

The party lasted till 5.30 PM. Then, Sean and I together with my younger sister went to Sto. Niño Parish Church to attend mass at 6.30 PM. 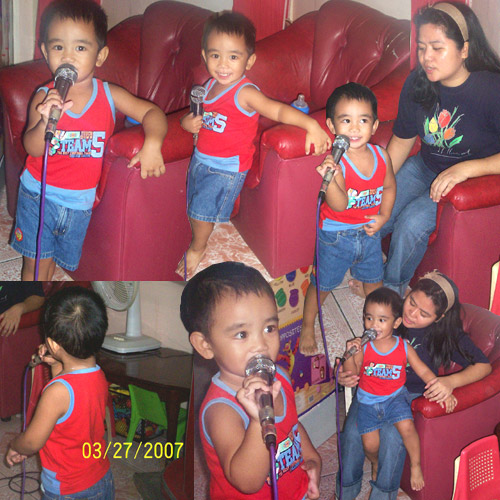 We also rented a videoke. Sean enjoyed singing his own version of “happy birthday to you”. He doesn’t even want to give the microphone to us.

He liked to sing a lot that he kept on saying “isa pa!” over and over again.