The fact that this is just a legend, we can’t say if it’s true or not. But I like the explanation, makes sense to me. 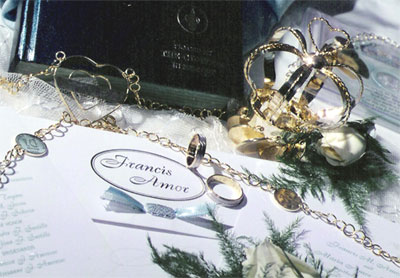 Now, If there’s one thing I am curious to know about wedding ring is that where should it be worn? On the left fourth finger or on the right fourth finger? Coz ours is worn on the right, while some couples on the left. When somebody asked me before, I just said, I don’t know, we were told to wear it on the right ring finger during our wedding ceremony.

A wedding ring or wedding band is a metal ring indicating the wearer is married. Depending on the local culture, it is worn on the base of the right or the left ring finger.

The left hand is also used for cultures that believe in the vena amoris or “vein of love” that is believed to be found in the left ring finger.

Okay, so wearing wedding ring on the left finger or the right finger depends on the culture, religion, tradition and personal preference. Now I know! There is no right or wrong way of wearing it. Well not unless you’re wearing it on your toes?!! 😛

While searching on which hand should a wedding ring be worn, I was surprised to see 4000++ questions in Yahoo! Answers. Each one has 5 or more answers, most  are serious while some are funny. Read on.

When I first thought of this post, I knew it would be a short one. Now I can’t stop copy-pasting! LOL!

Although my wedding ring is worn on the right finger, I would sometimes wear it on the left. But I haven’t worn it  for a long time already. Not because of anything else, but because my fingers grew bigger ( I don’t know why!?? hehehe!) it won’t fit anymore.

It seems that majority of people wear their wedding rings on the ring finger of the left hand. How about you?

8 thoughts on “About Wedding Rings”