For this week’s Mommy Moments, the theme is Pouting Face. Look at how Sean shows his disappointment by pouting. 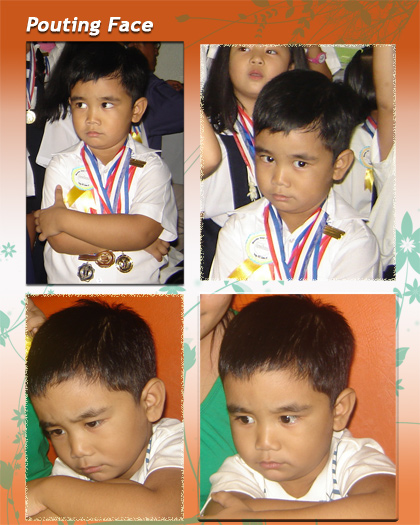 The first 2 pictures above were taken during their Nursery Graduation last March. They were singing on the stage and he was standing next to his cousin, but one of his classmates stood between them. While everyone was singing he was there showing displeasure, he hardly opened his mouth to sing.

The last two pictures were taken after we watched Barney’s Dino-mite Birthday in MOA last November. We were eating in a restaurant and while waiting for our food, he’s wandering around the place playing with the camera. I told him to sit beside me and that we won’t go to the Playhouse afterwards if he won’t behave. He can’t sit still for a few minutes doing nothing that’s why he’s very disappointed. It seems eternity to him.