I hate it when I receive spam messages. Who doesn’t? I’d rather receive spam email but not spam text. I still can control 85% of spam emails sent to me by filtering and other means but in spam text, duh I don’t know how to avoid them!

Just when you were waiting for a very important message or when you’re having conversation through text and then suddenly you receive this unwanted message from an unknown sender telling you to text BIG to 2332. Haller! I am not in any way interested so leave me alone! Istorbo ka! 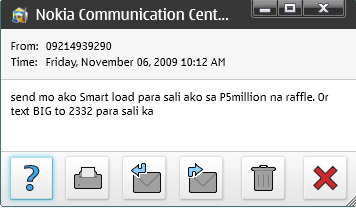 And so I thought sending spam text is already regulated?!!! The National Telecommunications Commission (NTC) can only regulate messages if they are sent from telecom providers using four-digit codes. But they are powerless if the spam text came from prepaid numbers.  Is that the reason why SMART is using 11 digit prepaid number instead of their usual 4 digit codes? SMART is indeed smart for doing that. But it’s annoying! 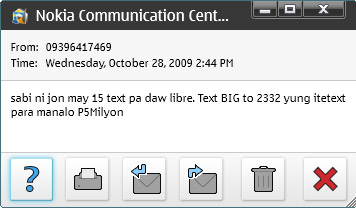 And since the NTC can’t do anything about it, what else can we do but ignore it. Ggrrrrr!

November 13, 2009 Update: I sent a message to @SMARTCares in Twitter and I was told to send ALERTS OFF to 211 to stop receiving all alerts/advisories. Will try it and hope it solves the problem. Thanks SMART! 🙂