I don’t have passport but have plans of getting one since we’re going to travel in October. But something came up and Sean and I need passport as soon as possible. Based on the application form (at the back), you can have rush passport for 7 working days. So I thought I could get one in two weeks time. 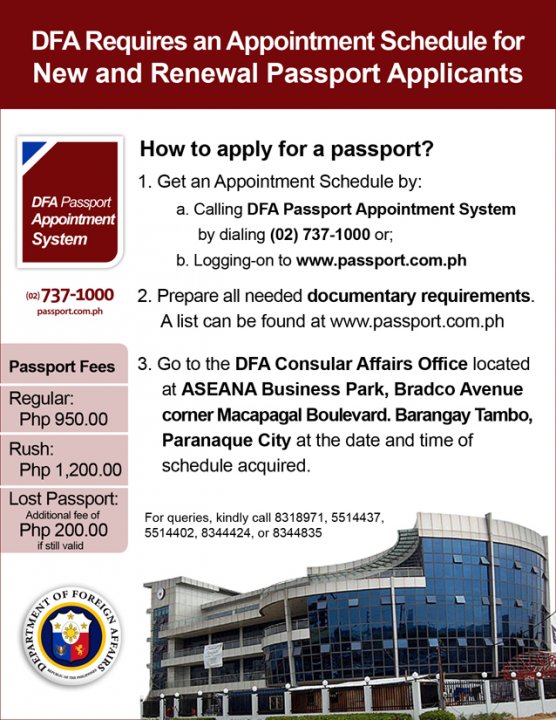 But heck! Walk-in applicants are no longer entertained. No appointment, no processing. All passport applicants should set an appointment with the DFA first.

The Department of Foreign Affairs (DFA) Saturday reminded passport applicants to schedule an appointment with the DFA to ensure that their applications will be accommodated.

“Only those with confirmed appointments will be accommodated at the new facility,” the DFA said.

I’m fine with the appointment system and I prefer it that way. It speeds up the process as applicants would be pre-processed using information given online, thus eliminating long queues formed with the old walk-in system. Less hassle. You don’t have to queue for hours while waiting to be attended to.

But my problem is, when I set the appointment yesterday, the earliest possible schedule date is already May 12. Called the Passport Information Center to ask if I could get earlier sched and I was told it’s not possible. We won’t be accommodated if we would go there ahead of our appointment date. They will only allow if it’s for emergency purposes. Of course I understand that, so I have no choice but go as scheduled.

The reason why Sean and I need passport in two weeks time is that my hubby will be in Singapore next week and will probably stay for two more weeks. He is on board a chemical tanker ship headed to Singapore for dry dock maintenance. He said some of his co-workers’ family would go there to visit, so he was asked if we are going too. He said not coz we’re saving for our planned travel on October. But suddenly he changed his mind and told me to process our passport so that their company can arrange for our visit. Their company will coordinate with the vessel principal so the agent from Singapore could pick us up at the airport.

But now, how can we go to Singapore if our schedule in DFA is on May 12. Plus 10 working days for rush processing of passport. So it’s more likely that our passport will be released few days before June. I don’t know anyone who works inside DFA. If only I know one, I badly need his help. I read somewhere that if you have a friend or if you know someone who works inside, passport can be released in few days time. I don’t mind spending few more bucks naman. Kaso nga wala naman akong kilala.

No appointment, No processing
No passport, No Singapore
No ID, No entry
No read No write
No more A mor