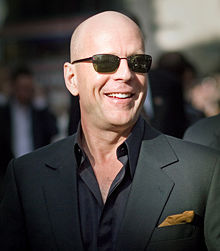 I should be posting something else earlier today, but when I turned on the TV and saw tonight’s schedule of Star Movies, I decided to watch it. There’s a marathon of Bruce Willis’ movies from Tears of the Sun, Die Hard 1, 2, 3 and 4.0. But I didn’t watch all of it, I wish I have time to watch it all. I just watched the Die Hard with a Vengeance ‘coz I haven’t seen it ever since.

I didn’t like Bruce Willis before, I don’t know why. I didn’t even bother watching his Die Hard series and other films then. I like Demi Moore, she’s so darn pretty, but Bruce, no! For me he looks so brusque, just like his name. I don’t know why that was my perception of him during my younger years, haha!

But when I saw Armageddon, oh my! I became an instant fan. He made me cry at the last part when he pushes AJ (Ben Affleck) back into the hatch and closes the door. I was crying when he said It’s my turn now. Okay, kid you go take care of my little girl now. That’s your job. Always thought of you as a son. Always. But, I’d be damn proud to have you marry Grace. I love you, boy. Bye son. And also when he contacts Grace at NASA headquarters and they exchange last goodbyes. I can watch this over and over and still cry, haha! I also love The Sixth Sense.

Now, whenever I watch TV and his film is being shown, I try my best to watch it. I realized I should have not ‘judged’ him first without seeing any of his film.

I should have not judged him before because first, I am not a judge, and second, he is not a book. Di ba Melanie? 😀